Apologies for bunching in these past three days into one post! I've been either on the go, or resting, since arriving back from Hastings yesterday so I didn't get a chance to update last night.

I left London on Thursday (the 22nd) and headed towards Hastings on the Southern train line, to see my friend, Cyd. The two hour long ride did feel a bit long, though not as dramatic as finding Victoria Station in London and making sure I was on the right train (they listed it as Ore, which I was not told about when I ordered the ticket). 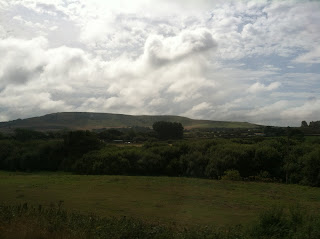 Close to Polegate in East Sussex 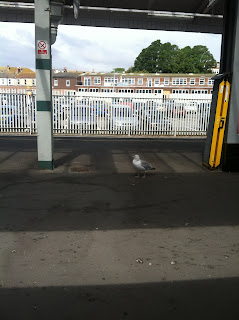 The Eastbourne Seagull! No, but really, Eastbourne is gorgeous. Full of beautiful architecture and mountains!

About ten minutes before arriving, I was able to see the English Channel. The water shined off the sun like a wave of diamonds. Sadly, I was too hypnotized by its beauty that I didn't get any pictures.

Cyd showed me the busier sections of Hastings, where the market and all the shops were. The coolest bits, I thought, were the steel statues just hanging out in the middle of the town, and Hastings Castle. The only way to access Hastings Castle was by a lift, but that was more effort than we wanted, also costly to see the castle as well. We could enjoy the view from the ground with no extra effort for free.

The thing about Hastings in that they don't get many tourists like in London. Any tourists they get are other English people on holiday but don't actually want to or can't afford to leave the country. According to Cyd, seeing Americans in the area is kind of rare. I found this out for myself when Cyd's mum said that my accent was cute. 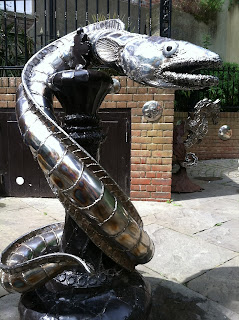 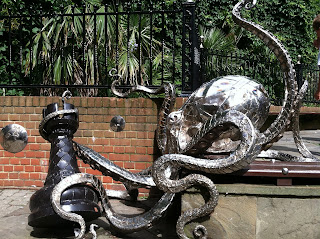 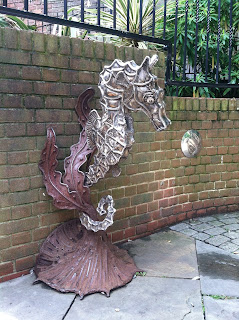 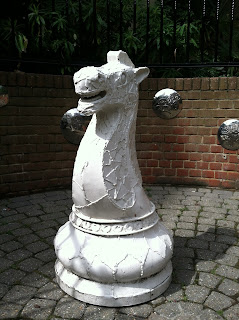 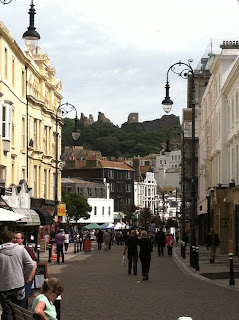 Cyd's home was in the town close to 20 mins away by bus, so we hightailed over there and rested for a few hours before hanging out with their friends. Meaning, we had a Ramsay's Kitchen Nightmares marathon and watched the cats in the backyard. A highlight of the night, later on, was when a woman on the train back to Hastings confused me for an Australian, then repeatedly asked, "Where in Canada is America?". 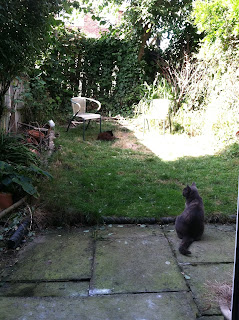 I left Hastings early Friday afternoon (the 23rd), in not the best of shape. Let's just say that riding on a train and trying to enjoy the English countryside, while hungover, is not the best time.

Before getting on the train, there was a black cat just randomly hanging out on the other side of the tracks, coating up attention from the people nearby. I was impressed and jealous by that cat's skill. 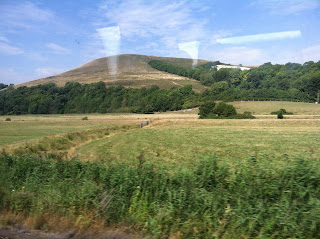 The ride back went by faster, and even though I felt terrible, luckily there weren't as many people this time around, so I got to keep my space. The train was close to 15 minutes late, so I didn't get back to the flat until 3PM.

I had a few hours break before I needed to go out again, so I showered, ate, and took a 20 minute nap. At around 6PM I was on my way to the Young Vic to see "A Season in the Congo" (with Chiwetel Ejiofor). My ticket only cost me a fiver because it was a standing spot.

You'd think that after standing for three hours for the Tempest, I'd learn, but no. I'm a glutton for punishment in the name of theatre.

Watch this space for my first AuTheatre review for "A Season in the Congo" SOON!

After the show, while walking back to London Bridge, I came up with a song about the Shard, for fun:

... with other made up verses along with it as well.

Today, the 24th, started with lunch at the Big Red with Cee and Caitlin. It was my first time meeting Caitlin in person, so the first thing I did was hug her and (once again) congratulated her on getting accepted into Cambridge. I at some point want to visit her up there once she gets settled in, so maybe during my term break at the end of October? We'll see.

The Big Red was basically inside of a double decker bus, which was really cool. It also covered us from the drizzling rain from outside. I thanked my lucky stars that I wasn't back at home. There's been a heat wave in Minneapolis this week.

The three of us each ordered a Big Red pizza. A Big Red inside of a Big Red. Ha. Ha ha. Punny.

Then we set off on a glorious chocolate quest to find 100% cocoa dark chocolate! It only took a few transfers to get to the Belgravia area (I tried looking for the house used in BBC Sherlock for 'A Scandal in Belgravia', but they all look alike!), but it was actually really easy to find Rococo Chocolates.

I got two bars of 100% cocoa dark chocolates. One from the Grenada Chocolate Company, and one that's specifically Rococo brand. We each tried a piece outside of the shop. Two bites was enough for me for one sitting, which is good, because that means that my 5-pound-each chocolates will last. I don't think Cee and Caitlin liked it at all. 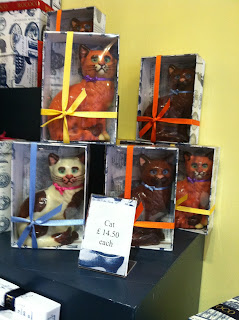 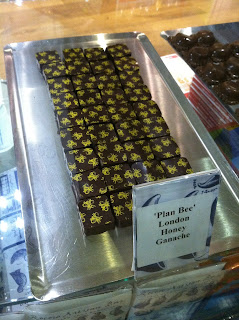 We walked through Hyde Park next to find Oxford Street. None of us knew exactly if there was a Peacocks store in the area (I had been talking about trying to find a cheap scarf), but Primark was suggested, so we headed there.

In Primark, there are no scarves, only snoods. I tried so hard not to giggle because snoods sounded like Oods and reminded me of Doctor Who (though Oods don't wear snoods - it's a sound thing; they could rock a snood if they wanted). 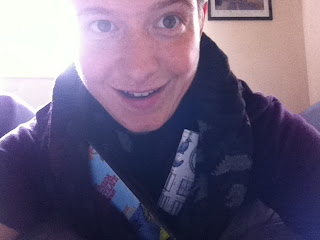 Hiding my chocolates in my snood

I originally planned to explore the Soho area tonight, but my body is requesting, well, more like demanding, rest. I will reluctantly obey.