This week started the beginning of the Fall Term Semester over here at CAPA. I'm lucky enough to have classes only on Tues, Weds, and Thurs during the week. This will be particularly helpful during some key trips and events in the near future.

Here's some highlights from each class, so then you get a glimpse at what kind of stuff I'll be doing/learning, along with a general observation or two.

Writing the City - London:
- Watching "My Fair Lady" (the film) this week AND next week! (How can I say no to a young, singing Jeremy Brett?)
- Field trips during class time to specific parts of London throughout the semester

Ethics in the Media:
- Later in the semester, we'll be going on a field trip to the Guardian

London Across History, Literature, and Film:
- Started the first day by going on a boat ride on the Thames 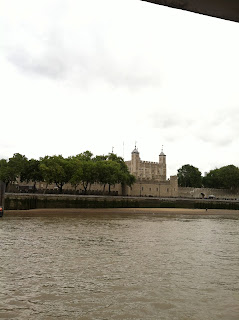 Tower of London (didn't have enough time to go in, sadly) 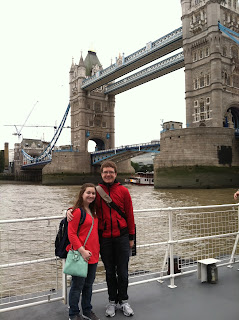 Sarah and I at Tower Bridge 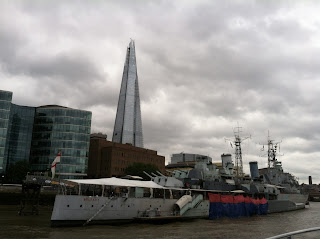 The Shard and HMS Belfast

Shakespeare and London:
- Class trips to see Taming of the Shrew at the Rose Theatre on 18 Sept, Macbeth at the Globe on 25 Sept, and Prince of Denmark at the Ambassador's Theatre on 13 Nov.
- This teacher, unlike the ones I've taken Shakespeare courses from before, you can tell is extremely passionate about theatre and the importance of seeing/hearing Shakespeare and not just reading it, which I'm very much looking forward to

Modern Acting:
- The teacher is fun, enthusiastic, and points out that performance begins at the feet. I think I might be the only person that doesn't walk heel to toe in the class, something that I was paying attention to during one of the exercises
- Class trips to see The Lightning Child (It'll be the second time for me, but on Sunday I'll be in the yard, with the class I'll actually have a seat! My first Globe SEAT!) on 17 Sept, A Doll's House at The Duke of York Theatre on 24 Sept, and The Woman In Black at The Fortune Theatre on 1 Oct.
- We get a special actor guest at some point during the semester. I don't want to reveal whom because it's not finalised, also because I love keeping the suspense.

This morning I've spent the past few hours at CAPA typing up notes and a few related things for classes. It's interesting having the entire resource centre for yourself.

(If anyone in my Ethics in the Media class is reading this, THANK YOU for not checking out the Ethics for Journalists textbook - the chapter was massive and I was thankful for it still being in the center)