I took a journey over to Clapham Common.

For the second time.

Twelve days ago, I set out to Clapham Common (the first time) looking for the Jeremy Brett Memorial Tree. What I encountered instead was a festival with carnival rides taking up loads of space. All I had with to help me find the tree was the name of the cafe that the tree was close to (La Baita), and a picture of the tree that I found on a reputable Jeremy Brett website. The picture didn't have any significant indicators that I could recall. The barista at La Baita told me that it was to the right of the cafe, but not how far. Let's just say, 20 minutes of me aimlessly walking around the Common made me wish that I had payed more attention in Elementary school when we learned about types of trees.

A few days ago, I received an email from the Clapham Society as to my enquiry of the tree's location. Luckily, the picture they sent me was of a different (in my opinion, a better) angle than the one I used previously. I felt confident that I could find it the next time I went.

I took a journey over to Clapham Common.

For the second time.

This time, in the pouring rain.

I got off at the Clapham Common stop on the tube, and walked outside. Since the festival was long gone, the space looked entirely new to me. There were less than a handful of people in the area as well; the gazebo and La Baita very nearly abandoned.

It's fitting though that my journey to find Jeremy's tree was in the pouring rain. I'm in the minority in which the rain helps my depression instead of hindering it. 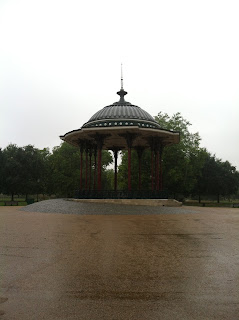 The gazebo in Clapham Common 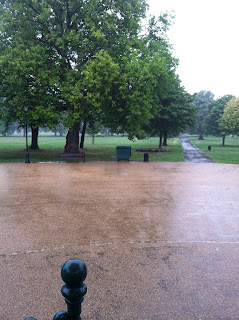 Do you see what I see in the horizon? 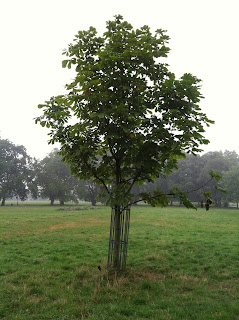 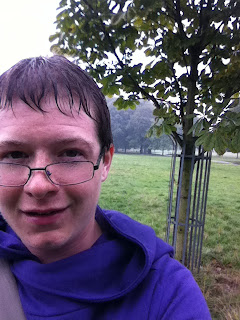 Me, drenched in the London rain, at Jeremy's Tree 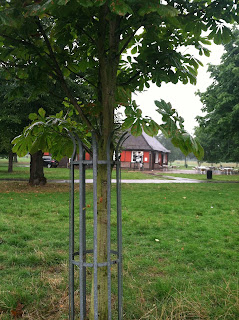 The distance from Jeremy's Tree to La Baita

I said a few private words at the tree. One thing I will say is that I told Jeremy to check if my three grandmothers were sitting there laughing at me, and that I hoped that at the very least, he would appreciate the gesture.

It's a good thing my immune system is awesome. I'm always the last to get sick. Afterwards, I promptly headed back to Willesden Green and armed myself with sweatpants, a jumper, a cup of tea, and some sweets.

Well, promptly is one way of saying it. I did have to walk all the way around the Common to find a tube station again. The Common is so massive that you will get lost. I wonder if that's why Jeremy loved it so much, why he spent the last years of his life there.