After treating myself to a Malteser cake at The Elephant House in Edinburgh, I set off for St. Andrews. St. Andrews, for those not completely in the know, is very famous for the birthplace of golf. It also hosts the University of St. Andrews, which, along with its long illustrious history, is where Prince William and the now Duchess of Cambridge went to university.

My reasoning for going to St. Andrews was not because of golf (which continues to disappoint the rest of the men in my family), or because of the Prince (I have my own mohawk-sporting, theatre costume enthusiast, geek extraordinate, Prince back in Minnesota, thank you very much).

I went because it's where The Student Prince was set.

I know I've mentioned this before without really going into details. Essentially, it's a modern adaptation of an adaptation of Arthurian characters, who go to the University of St. Andrews as students. If you wish to read it, you may do so here. Warnings and the general synopsis are all on that page. Any references to the story will be labelled as TSP, to avoid confusion.

Probably best to say that this is a Lucas endorsement only, not a CAPA one or anything - but it will give a better understanding as to why this trip was important to me. I mean, if people are able to make trips specifically to see Harry Potter related things, or Sherlock Holmes related things (which I have done); I have the upmost right to do so regarding a fanfic.

Fanfics really are an updated version of myths.

I arrived in St. Andrews on the 28th in the early afternoon. I realized once arriving, after seeing a sign that was highly suggestive towards Hugh Grant hanging above a shop, that a golf tournament was happening that weekend. Huge celebrities and things. The reason why ALL the hostels, B&Bs, and hotels were booked for the 28th. The reason why I had no accommodation for the 28th...

I spent an hour or two exploring the Castle Sands, which is right below St. Andrews Castle (In TSP, one of the characters tries to kill Arthur - and Merlin stops him in an epically painful way) I looked for seashells and pretty rocks to take back to England with me. I had no idea that there were agates in St. Andrews. Very pretty ones. Of course, one could just spend a long time looking out to the North Sea and be content. 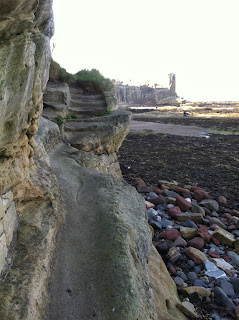 After two of my tupperware containers were full of earthly treasures, I walked to the University of St. Andrews. Found Sallie's (TSP - Arthur and Merlin's dorm), and Sallie's Quad (TSP's Raisin Monday shaving foam fight - a tradition that is very much upheld at the university every year). 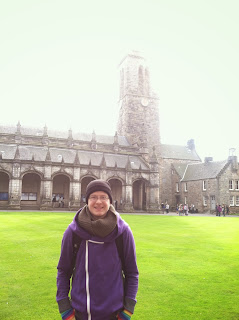 Me at Sallie's Quad (minus the foam)
I also visited the Museum of the University of St. Andrews (MUSA). The museum gives a detailed account of the history of the town, and the university - plus it's alumni and religious artifacts.
With a little time to spare before the sun went down, I went to the Pier at the East Sands. It's a tradition in St. Andrews (which was incorporated in TSP) to walk down the Pier after a service, in red gown, climb the ladder, and walk back to the shore. I wasn't in red gown, but a purple jacket, so I don't believe that counted. It was fun nonetheless. 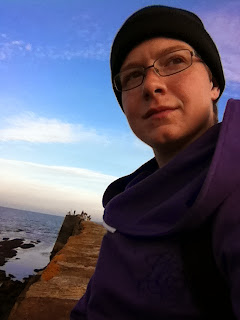 Me, the Pier, and the North Sea
I ended up walking around St. Andrews all night. Seriously. It was just like my first night in Cardiff.
At the stroke of midnight on 29th Sept, I sang "Happy Birthday" to myself at the "ghost" of Patrick Hamilton. 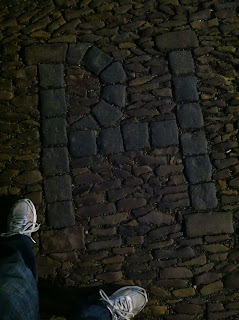 Do not step on the letters!

Until the sun rose, I spent some time at the War Memorial (I did not reenact the TSP New Years scene), and sat on a bench by the Castle, being very jealous of the moon because it looked like the clouds covered the moon like blankets.

One scene I DID reenact though, after sunrise, was TSP Merlin's "Emo Walk of Emo" (not my phrasing, clever as it is) over at the West Sands. I highly recommend listening to Automatic Systematic Habit by Garbage while reading that scene - sets up the scene perfectly. For non-TSPer's, just think unreasonably-thought-unrequited love plus royal drama. 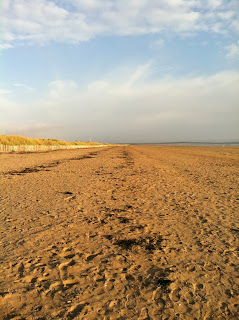 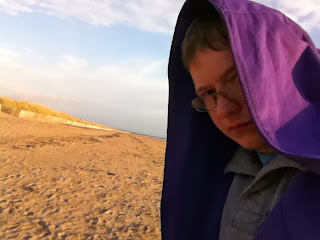 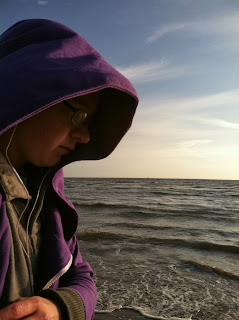 So sad!
Next on my Birthday itinerary was St. Andrews Castle. I had mentioned to the employee there that it was my birthday. She gave me a special deal on it, which was very nice of her. Since I went there at 9:30 on a Sunday morning; I was literally the only one in the Castle for the entire time I toured it. It was amazing! There was even a mine that went way under the Castle, which was epic. 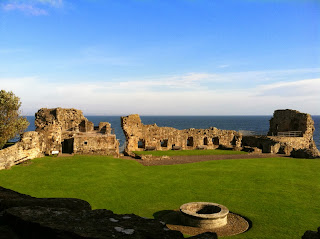 Afterwards, in all my excitement - I went to the area where St. Rule's Tower was located. Well, inside. I had walked past it many times the day before and had miniature heart attacks. 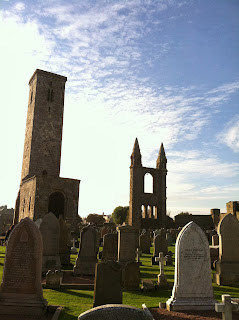 St. Rule's Tower and the Cathedral
St. Rule's Tower is used as a pinnacle point in TSP. It's also one of my favorite scenes, with the exception of the Arthur interview with Martin Bashir. Arhur and Merlin sneak up to spend the night at the top of the tower so then Arthur could prove to Morgana how tough he was.
Another reason why it's worth the money to see the top of the tower - the view. 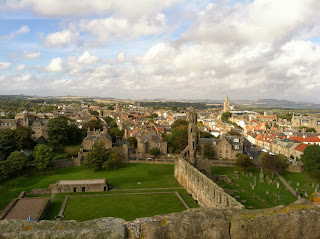 The top of St. Rule's Tower

While waiting for my hostel accommodation to finally open its reception, I walked around the entirety of the St. Andrews golf course. No, I don't remember which one (there was more than one course in that huge space). No, I didn't meet any celebrities. No, I could not tell who was who. Who could when they all dress the same?!
I also walked around the places mentioned/used in TSP: The Library at St. Andrews (TSP: "You don't have an academic father yet?!"), the Vic (TSP: Weekly GaySoc meetup), Kinness Fry Bar (Sadly closed, in TSP that was where Merlin and Morgana met for lunch), West Port Bar (TSP: Merlin confronts Sophia), Fisher and Donaldson (TSP: Gawain loves their doughnuts), Beanscene (TSP: Arthur hides from Lady Viva), and McKay's Bar and Restaurant (TSP: The Princess Bride viewing, which inspires Lancelot to ask Gwen out).

At around 5PM, I got settled into St. Andrews Tourist Hostel, which was right across the street from the Union.

I ended my birthday in a way that truly reflects me.

Resting my feet on something soft, drinking a bottle of cider, while watching Elementary.
Oh, yes, my birthday ended with a treat as well! 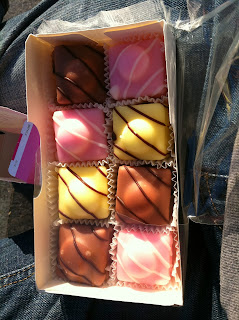 My 25th Birthday Cake
Magical Quarter Century Part 3 (the very last one, I promise) will be coming next, either this weekend or early next week.
Til next time, lovelies!
Lucas