This morning I went on a writing research led field trip over to Abbey Road. Not Abbey Road, the tube station. THE Abbey Road, famous for that one band with that one album cover, close to that one studio. That one.

I say writing research because my radio character is very into the Beatles and wanted Abbey Road to be one of her first adventures in London. I do not share her love for the Beatles (I only like their songs when other people sing them, just so you have an idea) - so writing research... and people watching.

I was surprised that Abbey Road looked like it was randomly placed in the middle of a posh neighbourhood. I was also surprised (though I shouldn't have been, honestly) that there was a guy in a neon jacket that takes pictures of people doing the walk for a tenner. Nobody I saw took up his offer, though. They brought their own cameras.

None of the photos I'll post of Abbey Road actually contain the road itself, because I'd rather not post pictures of people without their permission. I got lovely shots of the Studio instead. 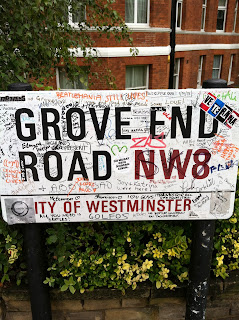 Close to the roundabout 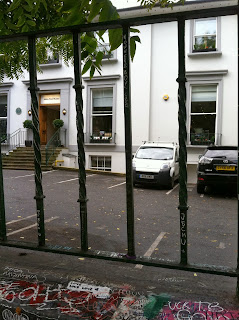 Abbey Road Studios - not open to the public 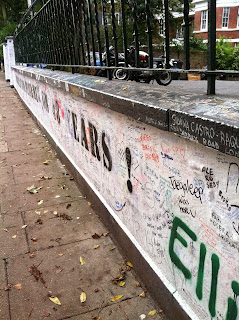 Surrounding the Studio - messages from around the world

There was one part of Abbey Road that I did genuinely get excited about... 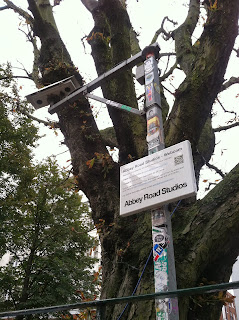 The Abbey Road Livestream Camera!
﻿
Imagine me, six months ago, on a restless night in Minneapolis - watching the Abbey Road livestream at 3 in the morning CST. That camera provided many moments of hilarity and successfully alleviated me from boredom more than I can say.

I saw many people then online, and today in person, take part in a tradition that I did not. I can say that on the same level as, "I have never seen an episode of Friends". Meaning, it'll amaze and stun others, but doesn't bother me one bit. 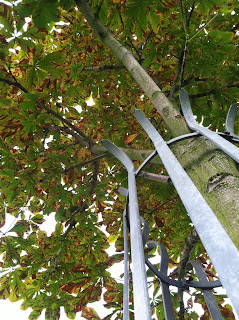 Sunday Monday in the Park Common with Jeremy('s Tree)

I've been missing his tree as of late. As ridiculous and inconceivable as it sounds, because dead men don't talk, and especially don't haunt their memorial trees; I walked to talk to him.

There were loads of dogs at Clapham Common this afternoon. I asked him if it made him happy and if any of them reminded him of Mr. Binks. I got a bit emotional from that, so I left. I did say to him that I would be back. I had realized on the way to the Clapham South tube station that in exactly two months I would be leaving back for Minnesota.

I don't know how to feel about that right now.

For the moment though, I am content that in two weeks time will be Midterm Break. My wallet is begging for mercy, so I will spend that time finding beautiful places to write, and making more appearances at his tree. 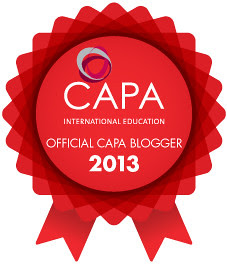